A new trend on the social network Instagram, is widely growing. Travelers had enough of the rude and disgusting behavior of some other passengers, and now they have a way to fight it: #PassengerShaming is a tag which has already been used by thousands of Instagram users to share photos of their trip’s least favorite moments. 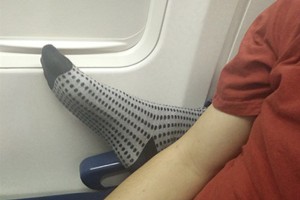 Some photos are shocking. Even if you travel a lot, you will find some photos showing behavior you had never thought of.
For example: a passenger laying their feet on top of another passenger’s seat, passengers heavily trashing their seating area, A guy cutting his nails during the flight and even urinating in the restroom sink.

While some of the documented behavior is neither forbidden by the carrier’s policy or illegal and enforced by law, it perceived by many as misconduct.
Should such a behavior become illegal?

Check #PassengerShaming on Instagram or passengershaming.com and tell us what do you think?

10 Destinations to Visit This Winter

The best way to access your money while traveling internationally