oneworld has today been named the World’s Best Airline Alliance 2015 for the third year running in the World Airline Awards presented by the independent Skytrax airline quality ratings agency – confirming oneworld’s position as the most highly prized global airline alliance. 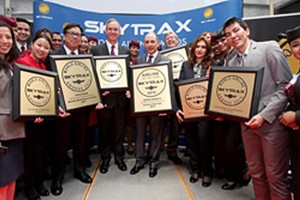 oneworld is the current holder of an unprecedented six of the nine “best airline alliance” titles available in the leading international industry award schemes.  Besides the Skytrax honour, oneworld is also:

oneworld member airlines also flew high in the Skytrax 2015 World Airline Awards, with Qatar Airways taking the top Airline of the Year title, held the previous year by fellow oneworld member Cathay Pacific, and winning back the award it held in both 2012 and 2011.

Qatar Airways in addition received the awards for the World’s Best Business Class Seat and Best Airline in Middle East.

Cathay Pacific was named Best Transpacific Airline, while its affiliate Dragonair, which is also part of oneworld, too the trophy for the World’s Best Regional Airline.

Also among with winners was Finnair, as Best Airline in Northern Europe for the sixth year running.

Skytrax’s World Airline Awards are based on the results of a survey of some 18 million travellers from more than 160 countries, in what the agency describes as the only truly global, independent passenger survey of airline standards.

Covering more than 200 airlines, it analyses customer satisfaction for the overall airline passenger experience across more than 40 areas on the ground and in the air, from check-in to boarding, seat comfort, cabin cleanliness, food, beverages, in-flight entertainment and staff service.

The awards were presented at a ceremony this morning at the Paris Air Show.  oneworld Vice-President Corporate Communications received the Best Airline Alliance Award, on behalf of oneworld, from Skytrax Chairman Edward Plaisted.

oneworld’s Michael Blunt said: “oneworld aims to be the first choice alliance for frequent international travelers the world over, with quality one of our core values, so we very much appreciate being judged best in the biggest independent survey of international air travellers for the third year in a row.”

oneworld is an alliance of 15 of the world’s leading airlines, committed to providing the highest level of service and convenience to frequent international travellers.  Member airlines include airberlin, American Airlines (including US Airways), British Airways, Cathay Pacific, Finnair, Iberia, Japan Airlines, LAN Airlines, TAM Airlines, Malaysia Airlines, Qantas, Qatar Airways, Royal Jordanian, S7 Airlines and SriLankan Airlines, plus around 30 affiliated carriers.  Between them, as part of oneworld, these airlines:

oneworld member airlines work together to deliver consistently a superior, seamless travel experience, with special privileges and rewards for frequent flyers, including earning and redeeming miles and points across the entire alliance network.  Top tier cardholders (Emerald and Sapphire) enjoy access to more than 600 airport lounges and are offered extra baggage allowances and priority baggage delivery.  The most regular travellers (Emerald) can also use fast track security lanes at select airports.